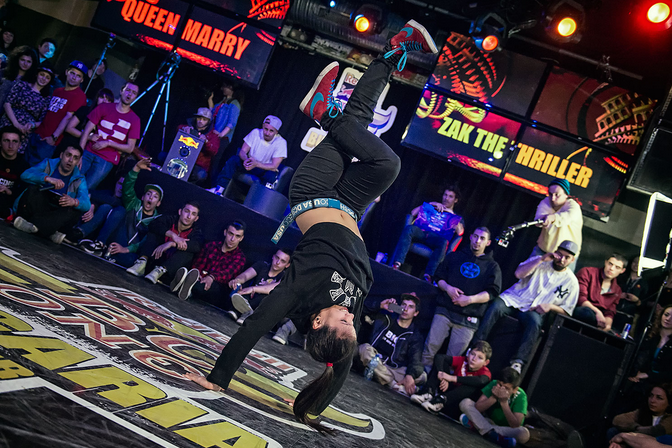 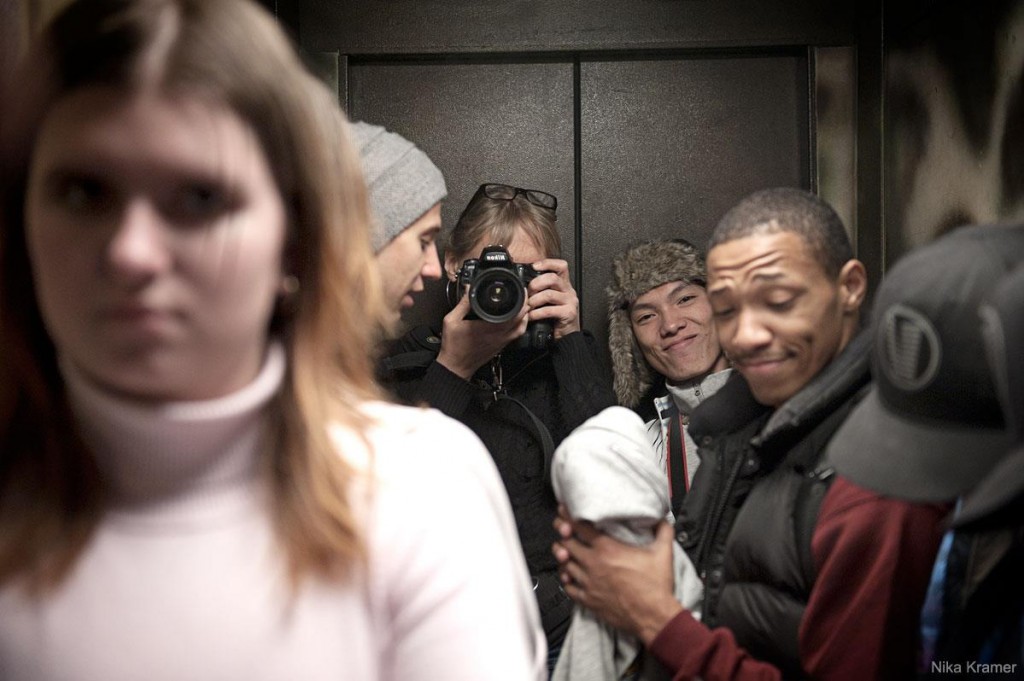 Nika is a photographer from Germany – she shoots for Redbull and many big events (http://www.nika-kramer.com/) and is one of the founders of We Bgirlz. Remember her, she might get the best pic of you one day!

Nika also writes for the Redbull Blog and she mainly covers bgirl stories, interviews with pictures. It’s called spotlight on. We’ll share the interviews here with you, credits go to Redbull BC One and Nika Kramer.

This week: Queen Mary, first female winner of a RedBull BC One Cypher.

In a victory that’s been heard around the world, Bulgaria’s B-Girl Queen Mary wrote Red Bull BC One history when she became the first-ever female to be named Cypher Champion.

The 18-year-old powerhouse has been breaking for eight years, and has made a name for herself in the international scene. With this new notch in her belt, she will go on to represent Bulgaria at the Red Bull BC One Eastern Europe Final in Baku, Azerbaijan, later this year.

Mary is not only a force to be reckoned with on the dancefloor, but the impressive dancer also speaks six languages and has her eyes set on medical school. We sat down with the B-Girl wonder and discussed why she thought she won, her recent fame, how she trains, being a woman in the scene and how she uses her beast within to smoke her opponents.

Did you expect to win the Cypher in Sofia?
Not at all. But during training, I was kidding around with my crew and told them, “I’m going to win this! I’m going to show all the B-Boys!” I was just joking, but then it happened and I was so surprised. I was so, so happy. Actually, I was the happiest person there with all the love they gave me after the battle. Everybody was so positive, everything– the energy, just everything!

Everybody was just so happy that you won. The whole audience, all the other B-Boys… they celebrated you.
Yes, it was strange that nobody seemed to be jealous. Everybody was smiling and happy.

How did you practice for the Cypher, and how often do you train?
I practiced often. I prepared many sets, but I couldn’t use half of them because of the floor. I had some tricks and I used them, but most of my stuff was improvised and freestyle. I trained daily pre-Cypher, and I train for between four and five hours, always. I would only take a day off if I felt extremely exhausted. Sometimes I did some easy training, with only footwork and toprock, when I was tired but I really gave my all to prepare myself for the Cypher.

What was the problem with the floor?
Actually, it was very hard. When I did a windmill or something, I felt it very hard so even with jumps, if I didn’t execute them just perfect, it would have been painful. I needed to be careful not to injure myself.

Some people said that you looked like you got tired during the Cypher, but then you came back even stronger.
Yes, that’s true. I WAS tired, because it’s a hard competition. It was an eight-hour event! We started at 10AM with the workshops, and then we had the pre-Cypher to determine the Top 16, then the Cypher was next! It was very hard, all day long.

There are two challenges, one is mental and the other is physical. When you are tired, and you need to win this thing, you are not only battling someone else, but yourself too. You need to first win that battle with yourself, against your exhaustion, then beat the other dancer.

You are also a student as well as a B-Girl, correct?
Yes, I go to school, it’s my last year. Next year, I will go to university. I want to study medicine and would love to go to the university in Lyon, France. We shall see if it’s going to happen.

You know Red Bull BC One All Star Lilou is from Lyon?
Yes, Lilou and many other B-Boys! Many others also come from Marseilles and Montpellier.

Is that the reason why you want to go there to study?
Dance is a part of it, but I also really love France and think that it could be great to live down South. Great weather and good vibes. I’m actually not sure if I’ll have a lot of time for training while I’m in university. I really hope so, but the first year of medicine is incredibly difficult and time-consuming.

Do you speak French?
Yes, I speak Bulgarian, English, Russian, and French, a bit of Italian and a bit of German, I can’t really speak it, but I understand it.

You will now compete in a Red Bull BC One Final. Have you been to Baku before?
No, never. I even had to ask someone where it was recently. I’m good in geography, but I wasn’t sure where Azerbaijan was!

“It’s not as though everyone believes you can actually break just because you’re a woman. But words can’t stop me. My desire is high and if I want something, I do it.”

Are you going to change your practice routine for Baku?
I need to change a lot and work more. My coach is going to help me to prepare for that competition. We’ll make a program. So, yes, I will work much harder for that event.

You’ve become famous on the Internet after this victory.
It’s scary, really. I had 630 friend requests on Facebook just yesterday. I was shocked when I saw that. My phone is ringing all the time, so I turned it off now. It’s crazy! It’s a big responsibility to have made B-Girl history like this, and it’s my intention to represent for all of us.

Do you think it’s harder for women to be in the scene?
Well, yes, it’s harder because you need to show everybody that you can do it. It’s not as though everyone believes you can actually break just because you’re a woman. But words can’t stop me. My desire is high and if I want something, I do it. It’s of course physically harder to do this sort of dancing with a female body; however if you really want to work and you really want to do it, it’s not really a problem. The physical obstacles are not as hard as the mental ones anyhow.

“When others believe in you, it gives you more power and the responsibility to get the job done.”

What do you enjoy about working with a trainer?
When I struggle with something or don’t quite believe in myself, he’s always there for me to say: “You can do it! Just do it!” He pushes me to do it. And when I’m training, there are always moments when I see that one move is not great and I think that I’m not going to make it, he helps me fix it. He says things like, “Your left leg is over there just put it higher and it’ll work.”

How did you start with the dance?
I was 10 years old, and I did Latin dance and some waltz or something, and I came out of our practice room and saw the B-Boys practice in another room. There was something about them and the cool music, and I just fell in love. I started breaking one day later. I believe the date was November 18, 2007.

Do you train with men and women?
My sister also trains, and she actually came out to the Cypher. And yes, she’s little! I have two sisters, a middle one and a small one. The middle one is now 13, and the little one is seven. They were both very happy for me, even though the little one started crying at the end because everybody was hugging me and she couldn’t get to me. That was a very emotional moment for me, because I wanted to go hug her and then everybody came and wanted to take a photo with me.

That’s what happens when you’re famous.
Yes. But my family has always been there for me and they support me every time. They really help me.

Your family came out to The Notorious IBE once, right?
Yes, they totally loved it there.

So how does it feel to be the B-Girl champion?
Well, now I have more responsibility. I know that I have to work very hard and now it’s even harder than before. It’s admittedly fun, becoming famous and stuff, but then it becomes a responsibility and the work and everything else will be harder.

Why did you win that night?
Well, I was thinking about that. Maybe it’s because I’ve got a lot of tricks and I just went with them. Every set was always some tricks and then the freestyle, and I went with the music. Some things were very good on the music, and I think that’s why I won. I think it’s about the energy I gave as well.

“There is a beast [inside] that can kill the opponent, but on the outside I am smiling and positive. The beast gives me the energy to win, but the public sees it in a positive way. This is the way I battle. I don’t think you need to be mean.”

Yes, you gave incredible energy. Everybody could feel it, from your smiles to your power.
It’s a lot of work. How to explain it… well, the smile is very important because there is a public. All eyes are on you, including your opponent. So you are smiling, but you have this aggression on the inside. It’s that very anger that gives me my strength and energy. Nobody sees that I have this anger, because I’m always smiling. But the beast is just… inside me. There is a beast that can kill the opponent, but on the outside I am smiling and very positive. The beast gives me the energy to win, but the public sees it in a positive way. This is the way I battle. I don’t think you need to be mean.

So it’s a beauty and the beast type thing?
Yes, exactly: Beauty outside, beast inside.

So, do you have a tip for the B-Girls out there?
Never give up! There will always problems with the guys who can’t understand that nowadays women and men are equal. We are ready to compete with the B-Boys now. I hope my victory can motivate more girls and show them that we B-Girls can do it. So, go for it! And never give up! 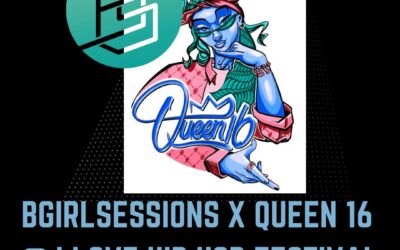 This year Bgirlsessions will be back with the annual 1vs1 bgirl battle. The battle will be in collaboration with the I LOVE HIP HOP FESTIVAL. The... 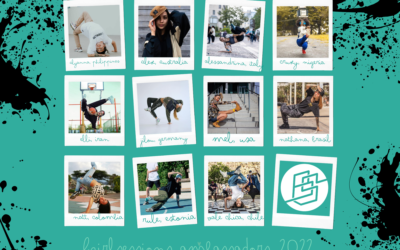 Bgirlsessions is happy to announce the 2022 bgirlsessions ambassadors. There were a lot of bgirls all around the world who were interested in... 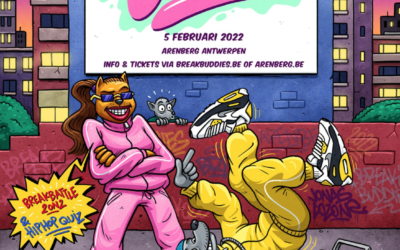